Have you ever wanted to live in a place where the cost of living is less than $1,000? You'll be happy to know that the nations listed below provide just that if you have! This list was developed based on monthly housing and living costs for an individual living alone.

These are the ten cheapest places to live in the world, ranging from nations in the Far East to tropical havens in Central America. The list of nations and statistics listed below, according to WealthyGorilla.com, was assembled from a variety of online sources, including Forbes, Wikipedia, and Nomad List. 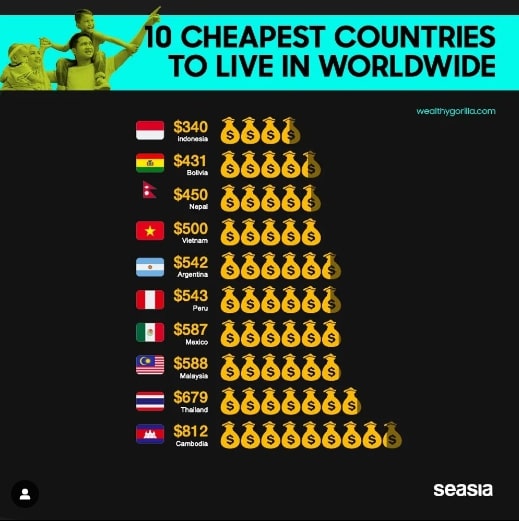 Cambodia is first on our list of the world's least expensive places to live. The country of Cambodia, sometimes known as Kampuchea or the Kingdom of Cambodia, is situated in the middle of South East Asia.

Its borders with Thailand, Laos, Vietnam, and the Gulf of Thailand total 181,035 square kilometers. Phnom Penh is the capital of Cambodia, which has a population of about sixteen million. Overall, living expenses in Cambodia are quite low, coming in at less than $1,000 per month.

Sihanoukville, one of the least expensive cities in Cambodia, has modest one-bedroom studio apartments that rent for about $246 per month, or $32 per night in an Airbnb. About 97.7% of people in Cambodia practice Buddhism, and the currency is called the "Riel" (KHR).

Thailand has the ninth-lowest cost of living in the world. Thailand, which was formerly known as Siam and is now known officially as The Kingdom of Thailand, is a nation with 76 provinces in the South-East Asian region.

With a total population of slightly over 69 million, Thailand is the fifty-first largest country in the world, measuring over 513,120km2. In one of the least expensive cities, Udon Thani, a studio apartment with one bedroom will run you about $199 per month, or $40 per night on Airbnb.

Bangkok is Thailand's capital, the Thai Baht is its official currency, and 94.5% of people there are Buddhists.

Malaysia comes next on the list, where basic housing and living needs can be met for as little as $588 per month. Malaysia shares borders with Indonesia, Singapore, Thailand, Vietnam, and the other two South East Asian nations.

Thirteen states and three federal territories make up Malaysia, which is divided into two parts by the South China Sea. The Peninsular of Malaysia and East Malaysia are comparable in size, and Malaysia's overall area is 330,803 km2.

Malaysia has a population of 31.6 million people overall, with Kuala Lumpur serving as the nation's capital. You can expect to pay about $209 per month for a one-bedroom apartment in one of the less expensive towns, like Kota Kinabalu, or $35 per night for an Airbnb.

The southernmost point of the United States is where Mexico is located. It shares boundaries with the Pacific Ocean, Guatemala, Belize, the Caribbean Sea, and the Gulf of Mexico in addition to the United States.

With a total area of almost 2,000,000 km2, Mexico is the fifth-largest country in the Americas and the thirteenth-largest state. Mexico City is its capital, and there are currently slightly over 129 million people living there. Mexico has the peso as its currency, and 83% of the population is catholic (MXN).

A one-bedroom studio apartment in Queretaro, one of the least expensive cities in Mexico, will run you just $256 per month, or $24 per night in an Airbnb. You should expect to pay about $1.54 for a beer, $1 for a coffee, and $3.10 for a lunch out when it comes to the necessities like beer, coffee, and eating out.

Peru has the sixth-cheapest cost of living in the world. If you're looking for an inexpensive place to live, this Spanish-speaking nation, with an average monthly cost of $543, is well worth considering.

South America's westernmost country is called Peru. Ecuador, Colombia, Brazil, Bolivia, Chile, and the Pacific Ocean are its neighbors. Currently, there are 32.17 million inhabitants living there, covering an area of 1,285,216 km2.

Roman Catholics make up 73.7% of the population, and the sole is the national currency (Pen). If you want to stay in an Airbnb, you can expect to pay $24 per night or about $198 per month for a one-bedroom apartment in the city center. Based on the city of Arequipa, these costs.

Argentina is ranked number five on our list. One of the least expensive cities in Argentina, Salta, can provide a single person with housing and living expenses for the entire month for just $542.

Another Spanish-speaking nation in South America's southern half is Argentina. The South Atlantic Ocean, the Drake Passage, Brazil, Uruguay, Bolivia, Chile, and Paraguay are its neighbors. Argentina, which has a population of slightly over 44 million and a continental area of 2,780,400 km2, is the eighth-largest nation in the world and the second-largest after Brazil.

Given that Argentina is one of the most affordable countries in the world, you'll be happy to learn that a one-bedroom apartment can be had for $100 per month, or approximately $27 each night, depending on the season. The location of this will be Salta.

Vietnam is by far one of the least expensive countries in the world, so a month's worth of living there will only set you back $500. It has shared borders with China, Laos, and Cambodia and is the most eastern nation on the Indochinese Peninsula of South-East Asia.

On a total area of 331,212 km2, there are roughly 95.5 million people living in Vietnam. Although Ho Chi Minh City is the country's most populous city, Hanoi serves as its capital. The cheapest city in Vietnam for lodging is Nah Trang, where a one-bedroom apartment will run you about $259 per month or $24 per night on an Airbnb.

In Vietnam, there are many inexpensive activities to keep you occupied, and after a period there, like in most of the other destinations on the list, you'll probably be able to find even less expensive lodging and activities.

The third-cheapest nation to live in the world, Nepal, surpasses the $500 monthly threshold. The majority of Nepal is in the Himalayas in South-East Asia, although it also contains areas of the Indo-Gangetic Plain.

There are currently 29.3 million people residing there, dispersed throughout 147,181 km2 of territory. Nepal, which shares borders with China and India, is the world's ninety-third-largest country in terms of both people and land.

In Pokhara, one of the least expensive cities in Nepal, you can pay $164 for a studio apartment with one bedroom, or you can pay about $23 per night for an Airbnb. You should expect to pay around $1 for a beer, $0.73 for a coffee, and $2.08 for a restaurant dinner.

Bolivia is a landlocked nation in South America's western region. A total of 1,098,581km2 is occupied by its approximately 11.05 million present residents.

Sucre, the capital of Bolivia, is home to a diverse population that includes American Indians, Africans, Asians, Europeans, and Mestizos. Bolivia is the fifth-largest nation in South America and the world's 27th-largest nation.

The good news for those of you who speak Spanish is that there are 36 other indigenous languages spoken in Bolivia in addition to Spanish, which is the official and most widely used language there. In La Paz, one of the least expensive towns in Bolivia, a studio apartment with one bedroom will run you about $145 per month, or $23 per night on Airbnb.

You won't go broke eating out because a standard dinner will only set you back $2 and both beer and coffee cost around $1 apiece.

The world's cheapest country to live in is Indonesia. In South-East Asia, between the Indian and Pacific oceans, is Indonesia, also known as the Republic of Indonesia. With around 17,000 islands and a population of 264 million, it is the largest island nation in the world and the fourth most populous nation overall.

Certain locations in Indonesia, such as Bali and Jakarta, have prices that are more in line with those of other major western cities worldwide.

However, you may get housing and living expenses in places like Senggigi in Lombok for as little as $340 per month. A one-bedroom studio apartment will cost you about $142 per month, or $12 per night for a motel.