Up one spot from its position in 2021, Singapore is currently the seventh most inventive economy in the world.

132 economies are ranked in the report based on their propensity for and success with innovation. 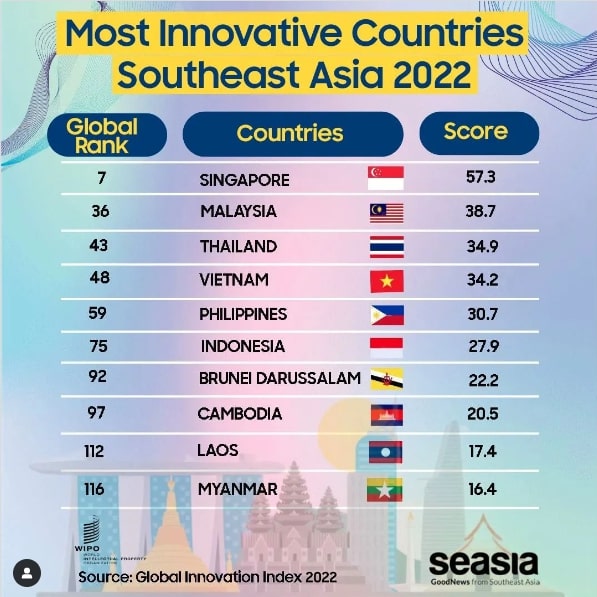 This year, Switzerland's economy has remained the best in the world. The United States, Sweden, Britain, and the Netherlands round out the top five countries in that order.

China has moved up one position to No. 11 globally. The only middle-income economy still in the top 30 is this one.

The ranking is based on two broad areas: innovation inputs and outputs.

The components of the economy known as innovation inputs support innovative activities. They consist of payments made for intellectual property, access to information and communications technology, and the efficiency of an economy's government.

The real outcomes of innovative activity in an economy are referred to as innovation outputs. They include creative outputs like the quantity of exported creative goods as well as knowledge and technology outputs like high-tech exports.

Singapore came placed at 11, 13, and 21 in the categories of infrastructure, knowledge and technology outputs, and creative outputs, respectively.

The Republic ranks first in the majority of input variables pertaining to institutions, including political and operational stability, the capacity to create and put into practice solid rules that support the growth of the private sector, and government efficacy.

It also performed well in other input metrics, such as imports of advanced technology and the proportion of graduates in the sciences and engineering.

Rena Lee, the chief executive of the Intellectual Property Office of Singapore, said in a statement on Thursday that the Republic's improved performance in business and market sophistication markers supported its strong showings in traditionally reliable indicators, including those relating to institutions and infrastructure, human capital, and research.

Singapore's high rankings in these measures "underline Singapore's position as a modern services hub with a friendly environment for domestic and international innovative enterprises."

However, Singapore's output rating has dropped one position to No. 14, reflecting the country's dismal performance in areas including the volume of domestic feature film production and trademark applications.

According to the Straits Times, Wipo director-general Daren Tang stated in a statement that despite the Covid-19 pandemic, investments in innovation grew in 2021.

However, he said that global uncertainties, such as those brought on by supply chain disruptions, as well as a slowdown in the conversion of investments into discoveries that boost economic output, cast a shadow over the prognosis for 2022.

Consequently, he stated, "We need to pay greater attention to not just investing in innovation, but also how it converts into economic and societal effect.

According to the paper, there could be two distinct waves of innovation: one driven by advances in supercomputing, AI, and robotics, and the other by developments in biotechnologies, nanotechnologies, novel materials, and other disciplines.

However, it noted, it will take time for the waves' beneficial effects to manifest because there are still challenges to be solved in areas like technology adoption.

The report's co-editor and co-founder of the Portulans Institute Bruno Lanvin stated, "We have a common responsibility to draw lessons from recent crises to put this revolution on the correct track, and tailor it to the future we want."