Many theories exist regarding the kebaya's possible ancestry. While some claim that the Middle East is where the kebaya first appeared, others assert that it may have come from nearby China.

The term kebaya has evolved to refer to a garment whose origins appear to be a blouse. It is derived from the Arabic word kaba meaning "clothing" and was introduced to Indonesia through the Portuguese language.

Everyone agrees, though, that the kebaya is one of Asean's most resilient traditional outfits.

The exquisite traditional clothing has persisted for generations and established itself as a fashion icon in the region, from the classic Nyonya kebaya to the iconic Javanese kebaya.

A brief history first. The Majapahit Empire, headquartered in eastern Java, is thought to be where the first form of the kebaya first appeared in the 15th century (now part of modern-day Indonesia). 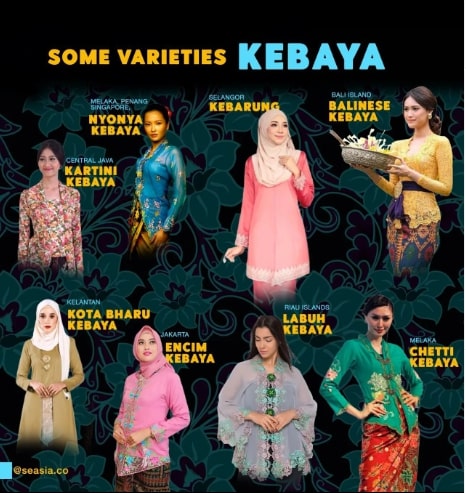 In Indonesia, it was first worn at some point between the 15th and 16th century. This outfit is comparable to the "length, fitting, flared kebaya known as kebaya panjang6" that Portuguese women who were arriving on the south-western coast of Malaysia, which is located across the Malacca Strait from Sumatra in northwest Indonesia, wore in the 16th century.

The existing kemban torso wrap was worn over the fitted blouse as aristocratic women adopted modest clothing in response to the growing Islamic influence in the area.

A renowned authority on ASEAN studies, Denys Lombard, pointed out that the word "kebaya" originated from the Arabic word qaba (clothing), which was then introduced to the archipelago through the Portuguese loanword cabaya.

At the period, only monarchy, aristocracy, and low nobility wore the kebaya. Commoners and peasant women in Java didn't begin donning more straightforward kebayas until the 17th century, when they began utilizing peniti (safety pins) to secure the blouse.

Between the 17th and 19th centuries, commerce and diplomatic ties allowed the kebaya's power to grow to surrounding nations including Bali, Malacca, Sulawesi, Sulu, and Mindanao. The kebaya quickly evolved into a variety of shapes and looks throughout the area.

One source compares the kebaya to an open-fronted, long-sleeved garment worn by ladies in the Ming Dynasty, which is another common source that mentions Chinese influences on the period's attire. The emergence of Islam's influence and the presence of Europeans in the archipelago are two significant historical events that are credited with the introduction of this type of clothing.

There is no disputing how swiftly the use of this garment was made distinctly Indonesian and spread from one island and ethnic group to another with its regional variants, whether it was Arabia or China that offered us the lovely kebaya. The spice trade that was taking place at this time in history was also related to the rapid spread of the kebaya's use.

The kebaya assumed a new function as the country's official attire for European women after Dutch colonization. The kebaya at this period was mostly constructed up of more cloth. Later alterations to this traditional outfit saw the addition of silk and embroidery as well as additional design and color.

The kebaya worn in Java and Sunda in the late 19th and early 20th centuries clearly influenced the most prevalent style of kebaya worn on the islands of Bali and Java today.

The kebaya of the previous century exhibited many of the immediately recognizable characteristics of today's kebaya, including a tight-fitting top that accentuates the woman's torso, the fold-back collarless neck and front opening, long sleeves, and the type of semi-transparent fabric. The stagen, a lengthy piece of fabric, was used to cover the woman's body in traditional kebaya.

Women of better social standing would have received assistance from other women in wrapping their torsos in the stagen, but those who were less fortunate to receive assistance may dress by tying the stagen's end to a post and wrapping themselves in it.

The stagen was thereafter covered by the partially translucent kebaya blouse. Instead of buttons and buttonholes, a brooch was used to secure this blouse. Combining the kebaya with the kain, a piece of unstitched clothing worn on the lower body and frequently (and mistakenly) referred to in English as a sarong, was typical. The pleats of this kain were put at the front of the body as it was wrapped around the wearer.

This kain was traditionally dipped in a cornstarch solution, folded meticulously by hand into pleats, and then pressed to achieve the desired crisp finish.

This Kebaya variation is incredibly well-liked among Chinese Peranakan communities in Melaka, Penang, Singapore, and Phuket, as well as with Melaka Chetties. Kebaya Peranakan or Nyonya Kebaya is also known as Kebaya Encim in Indonesia (Indian Peranakan).

Over a batik sarong, Peranakan women used to dress in knee-length tunics that were derived from the Malay baju panjang. The hip-length Kebaya Peranakan, however, rose to popularity in the 1920s after Peranakan women began to take inspiration from the lace-embroidered kebaya worn by European and Eurasian women.

The Nyonya Kebaya, as it is known now, shares some stylistic similarities with the Javanese kebaya but also has some distinct characteristics. For instance, the blouse often features finer embroidery around the edges and more vivid colors. Flowers, butterflies, phoenixes, dragons, insects, and even people are common design elements.

The costume would not be complete without a sarong, which frequently features vibrant colors and lively patterns like floral, avian, butterfly, checkered, and geometric designs.

For formal events, it is also paired with ornamental accessories like kasut manek, cucuk sanggul (a hairpin for buns), and a silver belt (hand-beaded shoes).

The kebaya is still worn for special events even though younger generations no longer wear it on a daily basis. It is still seen as a symbol of Peranakan identity.

Kebayas come in a wide variety today. Each country in Southeast Asia has its own blend of the conventional and local.