Full of History, These Are Top 10 Oldest Cities in Southeast Asia

Every old city in the globe has a tale to tell. There are still some of these ancient cities that have evolved into modern ones while keeping its historical and distinctive charms, despite the fact that many of them have long since vanished. Let's look at the ten oldest cities in Southeast Asia that make a lasting effect on visitors. 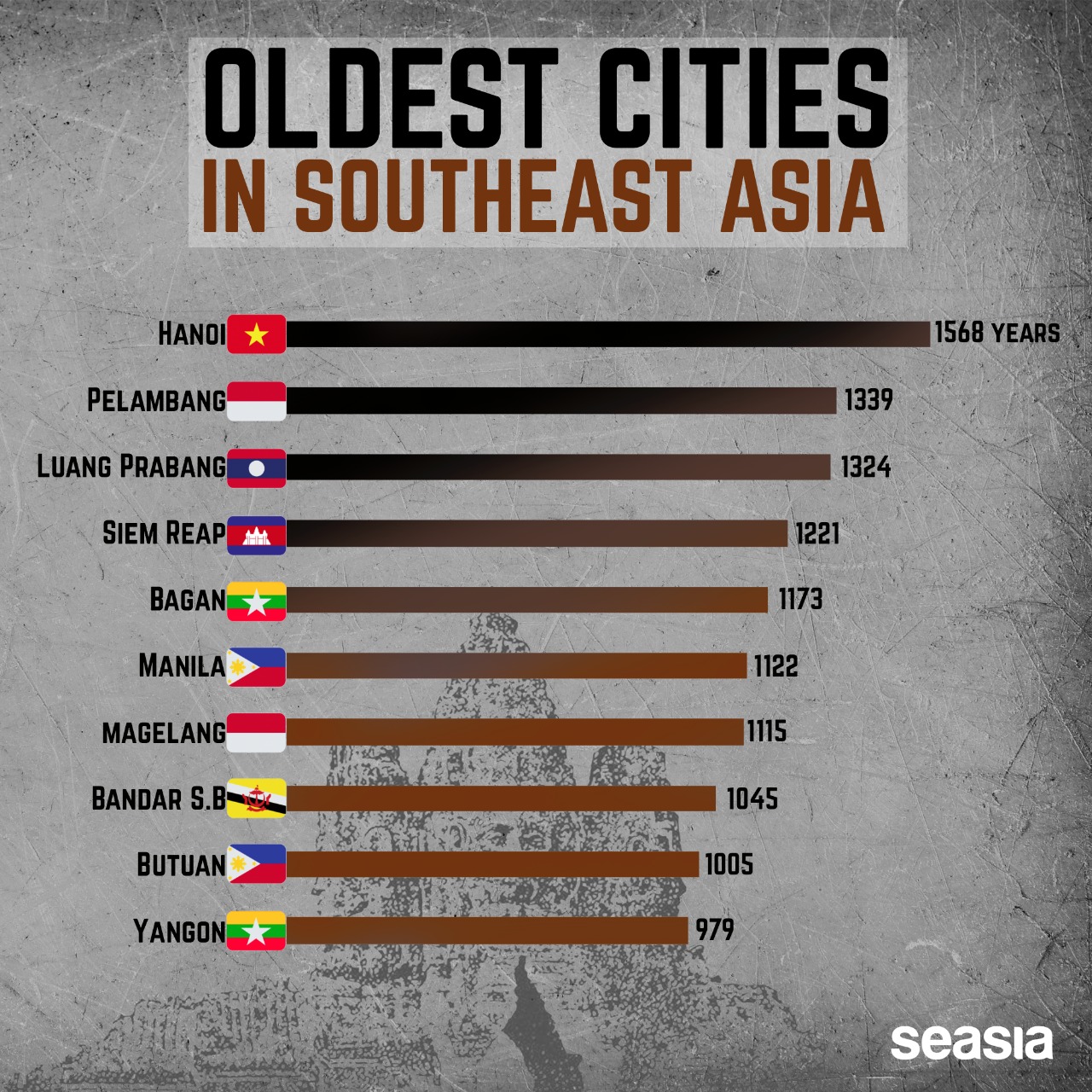 Since 454 AD, Hanoi has served as the nation of Vietnam's capital for more than 1,564 years. It has a long history of ups and downs and exudes an old-world aura. Ha Noi, which had previously been conquered and invaded by numerous other nations, finally attained freedom on September 2nd, 1945.

HaNoi has had significant improvements in its infrastructure, aesthetics, and economic growth year after year, making it one of South East Asia's fastest-growing cities. People can still see the historic remnants of the French and Vietnamese dynasties today when visiting HaNoi, which contributes to the city's traditional attractiveness.

The oldest city in Indonesia, Palembang, the capital of the Srivijaya Empire, is a hub of political power and has a rich cultural past. Palembang has a remarkable history that includes the rise and fall of mighty sultans, enormous wealth, and ferocious soldiers. This city, which is situated along the Musi River, is currently a regional hub for the rubber trade.

The city of Luang Prabang is found in northern Laos. It is a superb illustration of Laos' urban traditional fusion architecture and well-preserved townscapes. The Buddha's prediction of a prosperous and strong city was one of several tales that helped shape the metropolis.

Traditional buildings and one- or two-story French colonial homes coexist in the town. The town is among the most alluring tourist destinations in Laos thanks to its endearing characteristics and scenic surroundings.

In the northwest of the country, in Siem Reap Province, the second-biggest city in Cambodia is also its largest. From the ninth to the fifteenth century, this area served as the Khmer Empire's successive capital.

In recent years, Siem Reap has been regarded as Cambodia's top tourist destination. This historic but modern location has wowed visitors and encouraged them to stay longer so they could discover its illustrious past and vibrant present.

In the Mandalay region of the Republic of the Union of Myanmar, there lies an ancient city called Bagan with distinctive architectural features. From 1044 to 1297, it served as the Pagan Kingdom's capital, which was the first Burmese kingdom.

Bagan developed a wealth of different archeological and cultural structures, including 10,000 religious monuments, during the Pagan empire's more than 250-year rule. With more than 2,500 Buddhist stupas, temples, and monasteries, this region is now revered as the birthplace of Myanmar culture by a large number of people both domestically and internationally.

The Philippines' capital and second-most populous city is Manila. It has been put through a lot, with quick expansion and destruction causing turmoil where a beautiful colonial metropolis once stood. In the latter half of the 20th century, this city expanded quickly, which contributed to its development as a significant economic hub in the Pacific region.

The city is today renowned for its museums, stores, parks, and churches, as well as for having a thriving nightlife that lasts till daybreak.

Magelang, the seat of the Central Java Province, is one of Indonesia's oldest cities and is best known for serving as a jumping-off point for exploring the amazing sights of this nation. It was built as a settlement by the Old Mataram Kingdom and turned into a military outpost by the colonial administration of the Dutch East Indies.

For those who want to take in Central Java's greener side, this city is blessed with beautiful natural settings. Magelang promises to be the ideal vacation spot for travelers, boasting a wide array of amazing splendor.

As the only city in Brunei, Bandar Seri Begawan serves as the nation's capital. It was significantly damaged during World War II, but was fully rebuilt and turned into the financial and administrative hub of the nation.

Bandar Seri Begawan is distinguished by its excellent qualities, which draw tourists with its peace and quiet and opulent amenities. This city is home to opulent palaces, magnificent mosques, floating villages, parks, and the nicest beach in the area.

The oldest known civilization settlement in the Philippines is thought to be Butuan. In the past, the city was renowned for producing the best boats and gold in the entire Philippine archipelago. And Butuan City continues to serve as the Caraga region's commercial, industrial, and administrative hub. Visitors may anticipate some of the best buildings and infrastructure in this lovely city.

The capital and largest city of Myanmar is Yangon. In addition, it serves as Myanmar's spiritual center because it is where the Shwedagon Pagoda, which is regarded as the nation's most revered Buddhist temple, is located.

Many nations have colonized Yangon throughout history, and the city suffered severe destruction as a result. When Burma was freed from British domination on January 4, 1948, Yangon was designated as the nation's capital. Up until this point, Yangon has been a fantastic and well-known destination because to its blend of stunning colonial architecture, traditional pagodas, and several delectable street dishes.